skip to main | skip to sidebar

Name: Adelaide Ivánova
Title: Autotomy is the ability some animals have to change or mutilate their bodies in order to look like something else and protect themselves from the world and I was amazed to notice that we all do it and not just sea cucumbers.
Presentation: different sizes (from 9x13 to 30x40), with and without frame


After 8 hours in a hospital on 1. July, the doctor came and said: Adelaide, you have nothing. We did all the possible exams, and you are totally healthy. There are no reasons for the symptoms you have described. Which lead us to the last possibility: you just had an anxiety attack.


That happened after 4 months working on a project that seemed to go nowhere. On the beginning, my wish was to make a classic reportage, about two transgender boys. For 4 months I followed them in their everyday activities, only to figure out that it was not enough, if I wanted to describe what it is to be transgender – but acknowledging I had nothing didn’t mean I knew the solution.


After my break down, though, I simply understood that I should consider my body as instrument of narration, and consider myself to be not only the observer, but also the protagonist story teller. I noticed that, in order to tell their stories, I didn’t have to use only their perspective and use only photos in which they are showing. I started to investigate the feelings, questionings, fears and doubts that poped-up throughout the making of this project. I re-read the diaries I kept since the beginning of this work, and the words that came out regularly ware “doppelganger” (the idea that, even though I’d try my best not to feel so, I couldn’t help but see them as one being, as one entity, since they look so similar und live basically 24h together); “layers” (they not only are transgender, but above that they put another layer, which is being punk, and it seems for me that they want to be seen as something that is under their control, nit for something they cannot change (being born a girl)), “femininity”, “disguise”, “transformation” and “allegory”.


I used these words as new beginning, to make new photos or discover new photos, among these that I had already done. 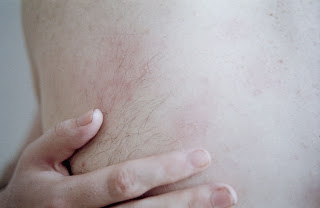